Playa Grande truly exemplifies a Surfers heaven with surfable waves most of the year. Here it is common to have a perfect barrel. The offshore winds often create beautifully surfable waves.

The Leather Back Turtles (largest sea turtles in the world) come here to nest their eggs. This has been occurring for million of years but the amount of turtles returning each year is decreasing in shocking proportions. This highly endangered species is threatened with extincion by egg poaching, development on land, but especially commercial fishing in which turtles drown by being tangled in fishing nets.

Playa Grande lies in the Province of Guanacaste, just north of Tamarindo. It comprises most of Parque Nacional Marino Laus Baulas, the most important nesting site in Central America for the giant leatherback sea turtle. Here a 5km long stretch of white sand Beach backed by a large Mangrove estuary that is home to many nesting birds and other wildlife.

Playa Grande is a 45 minute to 1 hour drive from Liberia Airport (LIR). Follow road past Filidelfia to Belen (where you will make a right hand turn just before you reach the gas station).

Follow the road until you reach the town of Playa Grande.

Bicycles are the best form of transportation to see the area. You can rent a car in Liberia or Tamarindo. Scooter rentals are available in Playa Grande.

Giant Leatherback sea turtles laying their eggs. The black sand beach at Playa Carbon, which is just around the corner.

Surf the perfect waves that break along the shores of Playa Grande. If you don't know how to surf you can take surfing lessons at Una Ola Surf Resort. Take a jungle boat tour along the estuary to see crocodiles, monkeys and numerous species of birds. Go fishing, using handlines and casting nets like the locals at the northern end of Playa Grande.

There is no shopping in Playa Grande other than a few surf shops and the grocery store (Las Malinches) in the Palm Beach Estates neighborhood on the southern end of Playa Grande.

Kike's Place is the only hotspot for nightlife in Playa Grande, but there are a few other spots to have a drink.

Playa Grande is a sleepy little community with many expats who have come down to live the "Pura Vida" lifestyle. There are several vacation homes for rent, along with a handful of hotel, B&B's and Cabinas.

These gentle giants of the oceans are on the brink of extinction. Egg poaching and encroaching development threatens their nesting spots, but the major culprit for their rapid decline are commercial shrimping vessels and long-line fishing boats in whose nets the turtles drown. Therefore, the larger portion of the national park isn't terrestrial: 22,000 hectares of the ocean in front of Playa Grande form part of Las Baulas National Park.

Most turtles nest on Playa Grande October through February. During that time of the year, after dusk visitors are only allowed on the beach with a guide. 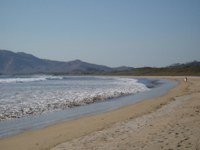 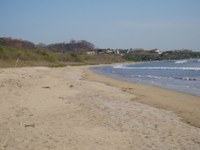